Find two paintings and one sculpture, each of which appears concerned with modernity, modernism and modernization. Indicate the relevant features on annotated reproductions.
The following questions should help.
• Does the subject seem to be of its time?
• Does the work or its subject matter appear mechanical?
• Does the artist exploit the look of the medium?

Make your own copy of Barr’s chart and extend it up to the year 2000 by including movements such as Pop Art. In a separate column list major events in politics and culture that you think have had some bearing on the kind of art practiced at the time.

Describe the features in each of these paintings that you think correspond to Greenberg’s view that kitsch ‘imitates the effects of art’. In other words how has the artist made the painting look artistic – as if for a sophisticated taste.

In his paper ‘Avante-garde and Kitsch’, Greenberg describes kitsch as being ” that thing to which the Germans give the wonderful name of Kitsch: popular, commercial art and
literature with their chromeotypes, magazine covers, illustrations, ads, slick and pulp fiction, comics, Tin Pan Alley music, tap dancing, Hollywood movies, etc” (Greenberg 1939) He mentions that it imitates the effects of art without being an actual work of art. For this exercise I need to study how the following paintings correspond to the view of kitsch imitating art. 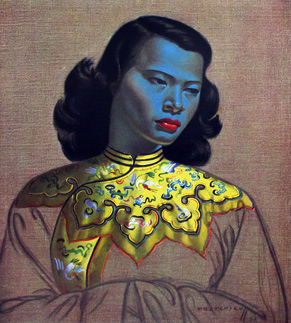 The Mass produced prints of this painting became one of the best selling in the 20th century. It is described by Matthew Bell in an article from the Independent as being “The Mona Lisa of Kitsch” (Bell,2013) which I suspect is in reference with its popularity but also in the way the girl is seated in a similar way to a renaissance portrait. This is one way that this painting could be described as imitating. Also the unusual direction of the girl’s gaze seems like it has been done intentionally in order to try to seem artistic, pushing the boundaries of a traditional seated figure. Bell mentions that this painting ” became an icon of kitsch” (Bell,2013)in the UK and Europe, despite the original painting itself not having much love at the time where it was residing in America. In the article Bell quotes a number of critics saying that “The critic William Feaver described The Chinese Girl as “arguably the most unpleasant work of art to be published in the 20th century”. In his 2006 obituary of Tretchikoff, our own critic Charles Darwent called him “a painterly Barbara Cartland”. Andy Warhol took a more populist view: “It has to be good,” he said. “If it were bad, so many people wouldn’t like it.” (Bell,2013)

It does seem that there was a generally negative view of this painting from the art world. The painting is also left seemingly unfinished with the bare drawing of the lower part of the garment and a lack of backdrop painted in. The only painted parts are the face,hair and top of the garment. This is very reminiscent of artist’s studies such as some of the ones of Leonardo Da Vinci. There is also a large number of non-finito works that in themselves are now appreciated in the same way as a finished masterpiece is. It seems that Tretchikoff is replicating this in the Chinese Girl but is leaving it unfinished intentionally as a way of imitating these non-finito works. 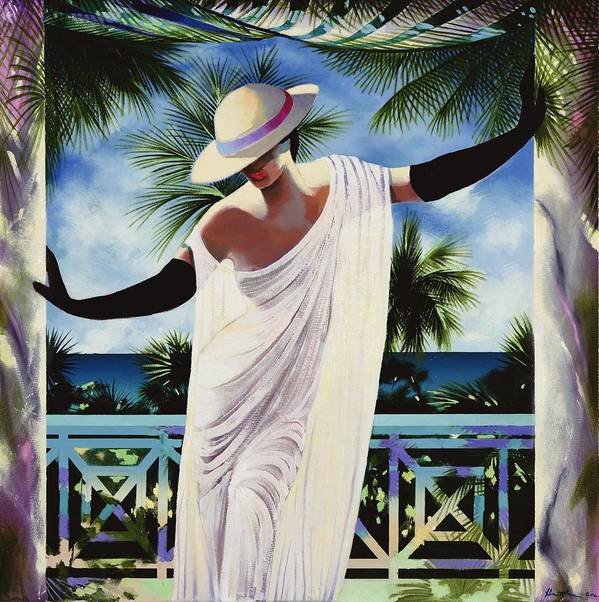 Do You Leave Footprints In The Sand?, Andrew Hewkin-2002

With the painting above I started by returning to the paper by Clement Greenberg. He takes rather an unpleasant stance on culture and society. He says that due to the industrial revolution, teaching the poor to read, led to reading being reduced to a daily function rather than a way to become more cultured. This then filtered into all aspects of the arts and kitsch became a way for “society to provide them with a kind of culture fit for their own consumption… insensible to the values of genuine culture, are hungry nevertheless for the diversion that only culture of some sort can provide.” (Greenberg, 1939) I feel that this painting by Hewkin would be something that Greenberg would put into this category. A painting for the masses to enjoy looking at in their living room but that would never find its way into a gallery to be studied and admired by ‘true art lovers’.

The painting above has a few aspects that could be argued as imitating artistic effects. The painting style is implementing flat areas of colour reminiscent of some impressionist works or the Scottish Colourists. The figure and the surrounding scenery is very reminiscent of the Art Deco style of the 1920s or the Art Nouveau of the 1890’s. You could be forgiven for thinking that this was painted around that period and it is possible that this was what the artist was intentionally trying to replicate. I feel that replicate is the correct word to use. The painting brings on aspects of these styles and periods but there is a substance missing from the painting and the composition and style does feel a little contrived. This would be therefore in my opinion a good example of Greenberg’s view of kitsch.

What would count as examples of ‘utter flatness’. List five things an artist might do to exploit the idea. In other words what kind of things might one put on a gallery wall that could pass for an abstract or figurative paint but also reveal themselves to be everyday objects?

Clement Greenberg believed that flatness was an essential quality in painting. It is a move away from the painterliness of previous impressionist movements. Flatness lead to many other art movements such as minimalism and post painterly abstractionism.  Greenberg discusses that “flatness, two-dimensionality, was the only condition painting shared with no other art, and so Modernist painting oriented itself to flatness as it did to nothing else.” (Greenberg, 1960) He discusses how the Old Masters were trying to create the illusion of 3-dimensional objects on a 2-dimensional plane but that in Modernist paintings, “one is made aware of the flatness of their pictures before, instead of after, being made aware of what the flatness contains.”(Greenberg, 1960)

Some examples of what could be used to help achieve utter flatness would be: 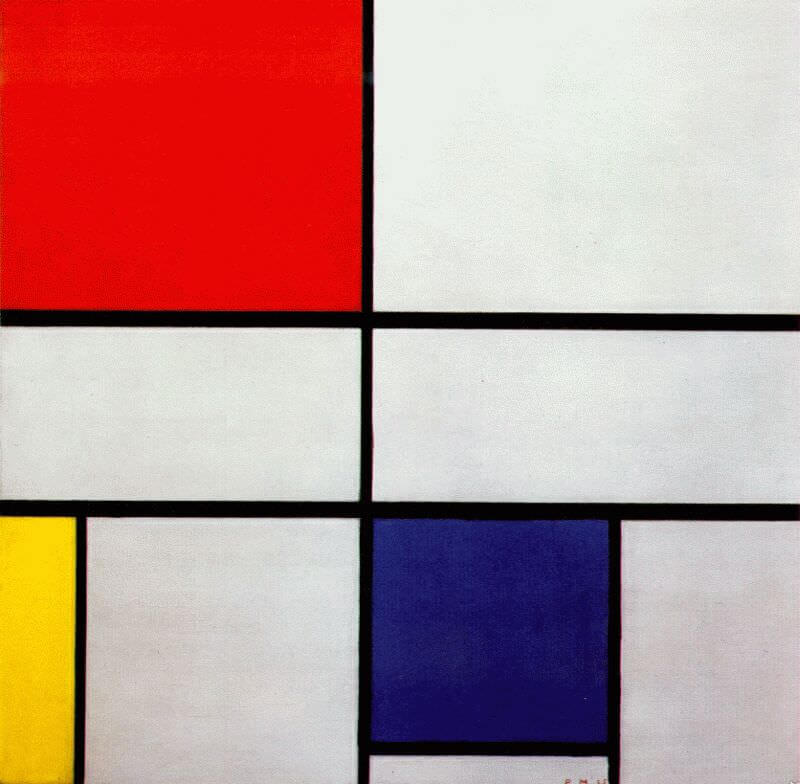 For a picture of your own choice say how the image indicates a point of view for the spectator and say why you think the effect is rare in the cinema but common in photography. Does the painting or photograph represent eye-contact between someone in the picture and ourselves. What films have you seen where characters treat the camera as another person.

For this exercise I chose the self portrait of Gustave Courbet.

The exercise asks me to choose an image where there is a point of view for the spectator that is rare in cinema but common in photography. I chose this self portrait of Courbet as the intense stare out of the image is one that is not generally seen in cinema. In photography this is something that is more generally seen with portrait photographs. A photograph can be a piece of art but can also be a form of documenting a moment and a modern substitute to a painted portrait. It is therefore common to see photographs where the sitter is staring directly into the camera. In cinema however this is not a common practice. It is known as “breaking the fourth wall” if this is done intentionally by the actors in a film or television series. It is a method that draws the audience in and makes them feel included in a film. It is often used for humor in films such as Ferris Beuller’s Day Off (1986). In this film the main character, Ferris Beuller addresses the audience directly throughout the film. This helps to add humor to the film and also to help the audience feel involved with the characters and situation.

Breaking the fourth wall can create a rush for the spectator, especially if it is unexpected. Some films use the technique of an actor staring into the camera without using such an obvious tactic as breaking the fourth wall and talking to the audience. With some films they use it as a quick unexpected moment which can be quite a shock to the audience and have that desired effect. A film with this moment as an example would be Rebecca (1940) where the terrifying Mrs Danvers gives her icy stare to the main character but also straight into the camera. It acts to show how cold and unfriendly this character is as the audience experiences that cold stare first hand. it really is a chilling moment. I would draw a contrast here between Mrs Danvers in this image below and the intense stare of Gustave Courbet in the self portrait above. Both create a feeling of unease as the eyes stare directly into the viewer, Courbets with desparation and a touch of madness and Mrs Danvers’ with ice and disdain.

Rebecca (1940) was directed by Alfred Hitchcock who became well known for some interesting camera techniques in his films such as in Vertigo (1958) where camera techniques are used to create an unpleasant effect of vertigo for the audience.

This exercise has made me think about portraits in general and how the expression on the face of a portrait that is looking directly at the spectator can evoke very different emotions in the spectator.